Grigor Wins in the Qualifications of Marburg Challenger 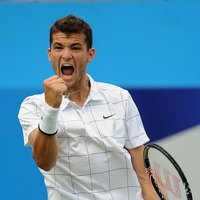 On Saturday Grigor Dimitrov started his participation at the 30'000 EUR ATP Challenger in Marburg, Gernamy. In the first round Dimitrov defeated the Pablo Carreno-Busta of Spain, ATP rank 343, with a score of 6-4 6-1.

In the second round Grigor played the Seed 4 of the qualifications Marco Crugnola of Italy and won in straight sets 6-4 6-3. This was a second match between Dimitrov and Crugnola, earlier this year Crugnola won at Dallas Challenger.

In the main draw entry decisive round Grigor Dimitrov will play the 19-years-old Russian Ilya Belyaev, Seed 7 of the qualifications. The match is at 12:00 noon CET at Ahrens Court.