Incredible Win for Grigor Dimitrov at the Quarterfinals of Open d'Orléans 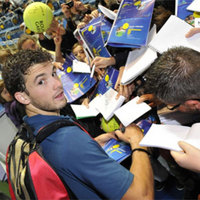 Grigor Dimitrov succeeded to find place in the semifinals of the ATP Challenger in the French town of Orléans after a dramatic quarterfinal win over the Spaniard Roberto Bautista-Agut. Grigor lost the first set 3-6 then he recovered and won the second set 6-2. In the third set when the score was 4-4 Dimitrov broke the game of Bautista-Agut and was serving for the match with score 5-4. The Spanish player took the break-point to make the score 5-5. Grigor succeeded to save the first match ball for Roberto when serving to stay in the match and with 6-6 the semifinalist had to be decided in a tie-break. The Bulgarian player was losing 3-6 but could find strength to save 3 match-balls. And after 2 h and 15 min Dimitrov won the match 3-6 6-2 7-6(6).

For reaching this level of the tournament Dimitrov gained 45 ATP ranking points which would move him to his new vest ever position of around 120.

On Saturday Dimitrov will play in the semifinal against Top 100 player - the winner of Bjorn Phau, No 95, and Michael Llodra, No 32.