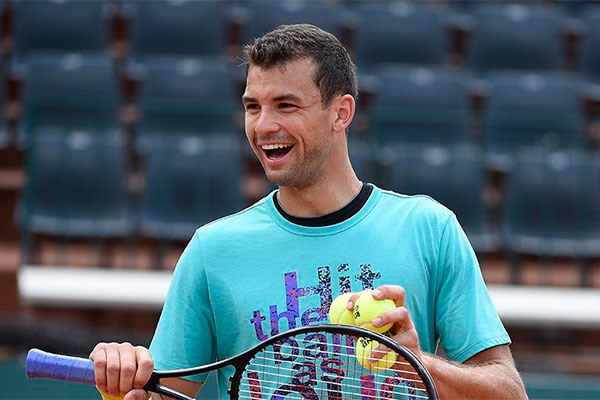 Grigor Dimitrov is 10th seeded in the main draw of the second Grand Slam tournament of the year Roland Garros in Paris, France. In the first round Dimitrov will play No 36 Jack Sock, USA, on Tuesday. The Bulgarian beat Sock in the only match they met last October at Stockholm Open.

Potential second round opponents of Grigor are the Spaniard Pablo Carreno-Busta, No 61, and Victor Estrella Burgos of the Dominican Republic, No 46. The first seeded play who Dimitrov could play is Tommy Robredo in the third round. In the 1/8th finals a clash Grigor Dimitrov - Rafael Nadal is possible. Dimitrov and Nadal are in the first quarter of the draw lead by No 1 Novak Djokovic. The other seeded player in this quarter are Bernard Tomic, Richard Guasquet, Kevin Anderson and Adrian Mannarino.

No 3 Andy Murray leads the second quarter of the draw and plays the lucky loser Facundo Arguello of Argentina in the first round. The seeded players in this Murray's quarter of the draw are Nick Kyrgios, David Goffin, John Isner, Marin Cilic, Leonardo Mayer, Viktor Troicki and David Ferrer.

The third quarter of the draw is lead by Tomas Berdych. The seeded players in this quarter are Nishikori, Verdasco, Bautista Agut, Lopez, Tsonga, Kohlschreiber, Fognini.

No 2 Roger Federer leads the 4th quarter of the draw. He could meet Ivo Karlovic in the third round, Cuevas or Monfils in the 4th round, or Wawrinka, Garcia-Lopez, Gulbis or Simon.

Grigor Dimitrov lost in the first round to Ivo Karlovic in the last year's edition of Roland Garros.

In 2013 Dimitrov reached the 3rd round where he lost to No 1 Novak Djokovic. In 2012 Richard Gasquet beat Dimitrov in the second round and in his debut in 2011 the Bulgarian lost to Jeremy Chardy in the first round.