Nick Kyrgios is the First Opponent of Dimitrov in Indian Wells 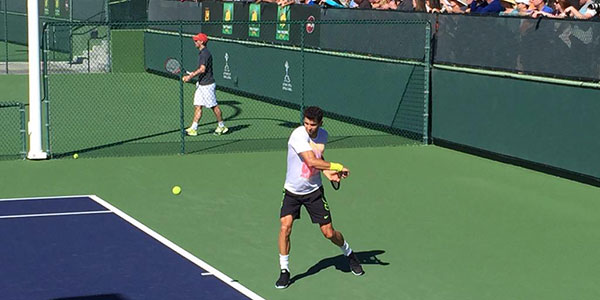 As 11th seeded player of the main draw of Indian Wells Masters Grigor Dimitrov starts directly from the second round of the tournament. His first opponent will be the Australian hope Nick Kyrgios. The 19-years-old Kyrios is at 37th position of the ATP World Tour ranking. In the first round he defeated the representative of the hosts Denis Kudla. Kyrios reached the quarter-finals at this year's edition of Australian Open where he lost to Andy Murray. DImitrov and Kyrios did not meet before at official ATP Tour matches.

Grigor Dimitrov and Mardy Fish lost in the first round of the doubles tournament to the Spanish pair David Ferrer and Fernando Verdasco 3-6 4-6.

#0: It was wonderful seeing you practice! Can't wait to see you later. Thank you for returning my sharpie so I can hopefully see you again!!! Oxox....GRISHO! Indian wells!