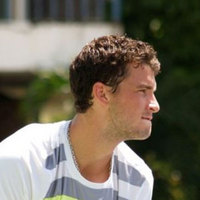 Grigor Dimitrov won the first round match of the 64'000 EUR ATP Challenger in the French town of Rennes. His opponent the Frenchman Laurent Rochette took easily the first set 6-1. Then Dimitrov responded with 6 won games and took the set 6-0. In the decisive 3rd set Dimitrov succeeded to break his opponent to 4-3 and even after missing 4 match-balls when the result was 5-4 he eventually closed the match with final result of 1-6 6-0 6-4. Dimitrov gained 8 ATP ranking points for this win.

In the second round on Wednesday Grigor Dimitrov will play the winner of the match between the Canadian Frank Dancevic and the German qualifier Matthias Bachinger.

#0: Grigor will play Dancevic in the second round. He just defeated Bachinger 7-5 7-6