Third Final for Grigor Within a Month 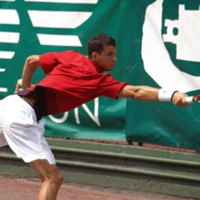 In the semifinal match of the ITF Futures in the Spanish town of Irun Grigor Dimitrov won in 3 sets. After losing the first set 2-6 to the Frenchman Kenny de Schepper he won the following sets 6-3 6-4. For reaching the final Dimitrov guaranteed 15 ATP ranking points.

In the final on Saturday at 5 pm CET Grigor Dimitrov will play Seed 1 of the tournament Sergio Gutierres-Ferrol of Spain, ATP rank 278. Grigor and Sergio have played 2 times before and the Bulgarian leads 2- 0 while the results were 4-6 6-3 6-2 and 3-6 6-4 7-6(4) both at futures in Spain and in both cases Dimitrov has won the title afterwards.

It is still not clear if Grigor Dimitrov will play at the qualifications of the 30'000 EUR Challenger in San Sebastian as the matches start tomorrow. Irun is only 25 km away from San Sebastian.