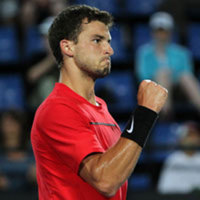 Grigor Dimitrov started with success at the first Grand Slam tournament of the year. He needed more than 3 hours to defeat the Frenchman Jeremy Chardy 4-6 6-3 3-6 6-4 6-4 making the head-to-head score 1-1. In the first round match between Dimitrov and Chardy at last year's Roland Garros it was Chardy who reached the success. It was only the second time in his career when Dimitrov plays 5-sets match.

For passing to the second round Dimitrov added 45 points but he needs to defend 70 ranking points from his last year participation at Australian Open. Grigor Dimitrov moved to No 78 in the ATP Ranking announced today.

In the second round Grigor Dimitrov will play No 10 Nicolas Almagro of Spain. Earlier today Amlagro defeated the Pole Lukasz Kubot 1-6 7-5 6-3 7-5.