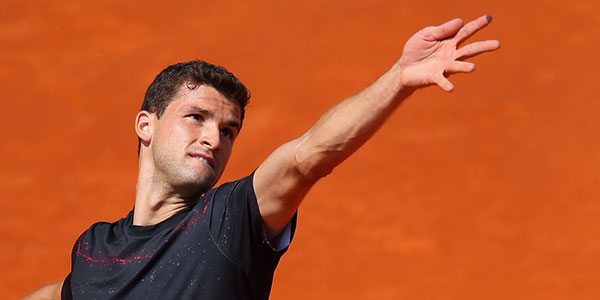 Grigor Dimitrov needed just over two hours to come through a second consecutive battle of three sets to advance to the third round, defeating qualifier Albert Ramos 4-6 6-3 6-4. In the first round Dimitrov won against another representative of Spain Marcel Granollers. Today`s win was 16th win for the season for the young Bulgarian tennis player.

On Thursday Grigor Dimitrov will play another Spaniard No 6 David Ferrer. In the 4 previous matches Ferrer won 3 - in 2011 at Cincinnati Masters, in 2012 in Indian Wells and Bastad. The last match was won by Dimitrov in Stockholm last year and it brought the first ATP Tour title for the Bulgarian.

Dimitrov - Ferrer match is third in the program on the Court des Princes after the battles of Raonic - Robredo which starts at 10:30 am CET and Wawrinka - Almagro starting not earlier than 12:30 pm CET.

#0: Clay tennis strategies, Be a puzzle solver! Do the opposite of what your opponent likes.
Stroke variation will pay the big dividends.
The game is slower on clay and you must find a rhythm in order to implement the correct strategy.
The reliable deep shot to your opponent's backhand which reaped immediate benefits on hard courts may not on clay.
The slow court surface and your opponent's defensive skills may neutralize your strategy.
Maybe hit a wider cross court angle shot to your opponent's forehand and then slug a shot deep to their backhand.
Mix up the spin, pace, trajectory and direction of ground strokes with the intention of opening up the court for a winner, either from the baseline or the net.
Make your opponent move a lot in the court forcing him to hit off balance shots.
Be creative. It’s fun!