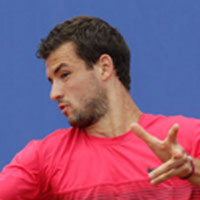 Grigor Dimitrov defeated No 37 Julien Benneateau of France in 3 sets, each decided by tie-break, 7-6(5) 6-7(1) 7-6(3). Dimitrov and Benneteau played 3 hours to decide the winner. After the first round match in Gstaad earlier this year, this was second win for the young Bulgarian in the 2 matches between them. Grigor gained 35K EUR for this win and 90 ranking points which will move him to around No 55 next Monday.

On Friday Dimitrov will play his fist quarterfinal in ATP 500 level tournament. His opponent is to be decided on Thursday between Nikolay Davydenkom ex No 3 and Paul-Henri Mathieu, ex No 12.