Another First Round Loss for Grigor Dimitrov 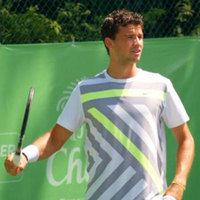 Grigor Dimitrov was beaten in the opening round of the main draw of Lambertz Open in the German town of Aachen. The experienced defending champion Rajeev Ram of USA won the 3-set match 3-6 7-6(3) 7-6(4). In the first set Grigorsucceededto break the game of Ram and reached 4-2 and subsequently won it 6-3. In the second round both players were taking their service games until 5-5 when Grigor won a break-point and was leading 6-5 to serve for winning the match. But then it was Ram who break the game of Grigor to 6-6. Grigor was leading 3-1 in the tie-break but eventually the American took the set. Without any won break-points the third set's score became 6-6. Similar to the second set Grigor was leading 3-1 in the tie-break but Ram won it 7-4. This was Grigor Dimitrov lost a second first round match and could not gain gain any ATP ranking points.

The next tournament where Dimitrov will participate is IPP Open in Helsinki, Finland, ATP Challenger with 106'500 EUR prize money which is also the last tournament for the Bulgarian for year 2010.