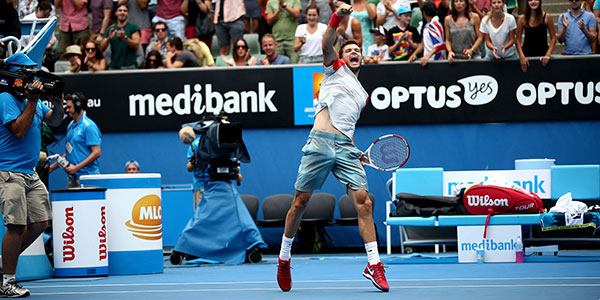 Grigor Dimitrov reached for the first time in his career the fourth round of Grand Slam tournament. In a clash between two of the young tennis stars at Margaret Court Arena, Dimitrov ousted the 11th seed Milos Raonic of Canada 6-3 3-6 6-4 7-6(10).

Grigor succeeded to save 2 set points before winning his 5th match point in the tie-break of the 4th set. The Bulgarian needed 2 hours and 36 minutes to win the match. After this clash Dimitrov improved to 3-1 the head-to-head record over Raonic.

"I'm definitely satisfied that I have gone through that match," said Dimitrov. "I think it's a great stepping stone for me to get into that second week that I keep talking about. But I have practised a lot. I have done a lot of homework. So, to me, in a way it's a bit expected. So I feel really good coming into the second week and I just take it one match at a time."

"Milos is one of the biggest servers out there and I just had to have a lot of patience and use every momentum I had in the match," said Dimitrov. "There was some tight rallies here and there, but I guess that's in the game. At the same time, I was really happy to play on that court. It was full house, and that brought an extra good feeling in the end."

The next opponent of the 22-year-old Dimitrov is Roberto Bautista-Agut. The Spaniard beat Benoit Paire of France 6-2, 6-1, 6-4 in the 3rd round. Dimitrov lost to Baustista Agut in Beijing last year, while in Challenger in Orleans, France, in 2010 Dimitrov won the match.