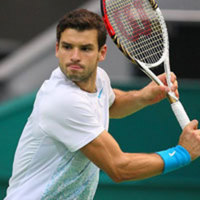 Dimitrov continues his winning series in Rotterdam and will play his first semifinal on ATP 500 tournament. Grigor Dimitrov lost the first set but took the next two to defeat his doubles partner Marcos Baghdatis (Cyprus) in the quarterfinals 6-7(4) 7-6(0) 6-3 within 2h 31 min.

Grigor added 180 points to his balance which will rank him very close to Top 30. And the place in the semis brought him 65'000 EUR of the prize money.

Juan Martin del Potro, Argentina, No 7, and Jarkko Nieminen, Finland, No 56, just started the quarterfinal match which will determine Grigor's opponent for the Saturday's semifinal.

The other semifinalists will be decided after the matches today of Roger Federer - Julien Benneteau and Gilles Simon - Martin Klizan.

#1: Great win! Congratulations! Seems your weapons are the Second Serve Points Won and Second Return Points Won...
Good luck against Del Potro! "Boris Becker once said that winning was secondary to what he was trying to accomplish on the tennis court. What he really wanted was to get better each time he played."
from "How to Win Every Tennis Match"
http://lwazcc.org/web/~tennis/pdf/HowtoWinEveryTennisMatch.pdf

#0: I think its time to the real breaktrough in rankings this year for you Grigor. Would be fantastic if make the final here and play against Roger!