Dimirtov Advanced to the Quarterfinals in Eastbourne 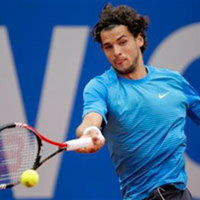 Grigor Dimitrov reached the quarterfinals level of ATP tournament for the second time in his career. In the second round the Bulgarian defeated 203 cm high Kevin Anderson of South Africa, seed 6 and ATP rank 38. Dimitrov and Anderson scored 8 aces each. Grigor reached 85% won points after first service. All this helped him to win the match with a result of 6-3 6-2. For reaching this stage of the tournament Dimitrov gained 45 ATP ranking points. In the quarterfinal Grigor will play the winner of Janko Tipsarevic of Serbia and Mikhail Kukushkin of Kazahstan.

Later today Dimitrov in a team with Andreas Seppi of Italy will entertain Seed No 1 of the doubles tournament Rohan Boppana of India and Aisam-Ul-Hak Qureshi of Pakistan, doubles ATP rank 8 and 9 and Seed 1.