Dimitrov/Bogdanovic Advance to the Quarter-finals in Israel 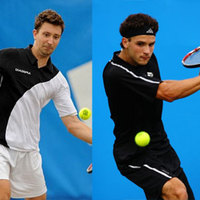 Grigor Dimitrov and Alex Bogdanovic of Great Britain started with success their participation in the doubles tournament of Israel Open. They defeated the Israeli pair Noam Behr/Amir Weintraub within only 51 minutes with a result of 6-1 6-4. This way Grigor and Alex gained 18 ATP doubles ranking points. The quarterfinal match is on Wednesday as their opponents will be decided on Tuesday.

On Tuesday, 4 May 2010, Dimitrov will start in the first round of the singles draw against Dudi Sela on 5 pm (4 pm CET) on Stadium court.