Dimitrov is Seed 5 at Prague Open 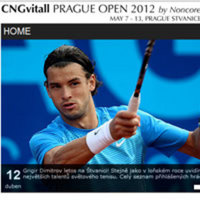 The seeded players in the lower part of the draw along with Dimitrov are also No 65 Lukas Lacko, Slovakia, No 79 Lukas Rosol, Czech Republic, No 101 Martin Klizan, Slovakia. Seed 1 and world No 63 Dudi Sela of Israel is the upper part with the Germans No 81 Tobias Kamke, No 102 Matthias Bachinger, No 105 Daniel Brands.

Grigor Dimitrov lost 2 positions and is at No 96 in this week's ATP Ranking.