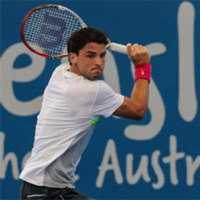 Grigor Dimitrov guaranteed place in the quarter-finals of the ATP 250 tournament in Brisbane, Australia with a magnificent win over Seed 2 Milos Raonic of Canada in straight sets 6-3 6-4.

The match started with dominance of Raonic, the Canadian had 2 break-points which we saved by Dimitrov. The Bulgarian took the first chance for break to 4-2. Grigor won his next service games to 0 and closed the set with powerful ace. The second set reached 4-4 with the serving party taking the game. Then after Milos's fault Grigor received chance for break and did it to 5-4. Dimitrov won the set 6-4 and this way closed the match within 59 minutes.

Ordered by the current rank of the opponent this is the 2nd most prestigious victory for Grigor Dimitrov - over Tomas Berdych then No 7 in Miami Masters last year and now over No 13 Milos Raonic.

Grigor Dimitrov added 45 ranking points to his balance which would position him at around No 44 next week, new best ever rank.

In the quarterfinals on Friday Grigor Dimitrov will meet the winner of the match between Seed 7 Jurgen Meltzer of Austria and David Goffin of Belgium.

#0: This is a Big Win!
The top ranked North American in the ATP, Raonic,
couldn't handle you. He didn't win one point on your first serve.
Congratulations!