Dimitrov Lost the Final in Orléans 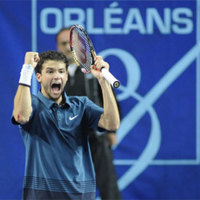 In the first set Grigor Dimitrov broke the very first game of Mahut to 1-0, quickly took the second service game to 0. Mahut took his service game to 2-1. Grigor took another service game to love - 3-1 as the aces of Grigor were already 4. Mahut served and took the following game to 3-2. Then followed another game won by Grigor to 0, Grigor succeeded to win the first break-point of the next game to 5-2. Then Mahut got the chance to break Grigor's game which was saved. Grigor closed the set with score of 6-2 and 6 aces.

Grigor had no poblems to take the first game of the third set to 1-0. Grigor missed the chance to break when he was leading 3-2. With the following service games won the score became 6-6. The tie-break started with extremely attactive points by both players. While leading 6-4 in the tie-break Mahut took the next point, the match and the title.

The brilliant participation of Dimitrov in the tournament brought him 75 ranking points which would move him to around 113 position. He also won 9000 EUR of the prize money of the tournament.

The next tournaments where Dimitrov applied for participation are 2 challengers in Germany - in Eckental from 1 November, 30'000 EUR, and in Aachen from 8 November, 42'500 EUR.

#0: Congratulations to Grigor for his amazing tournament. He's demonstrating the kind of player he is. It's hard to lose a game like this where all the statistics are in favor of Grigor but this is how tennis goes!.

Come on Grigor! Top-100 is at your fingertips!