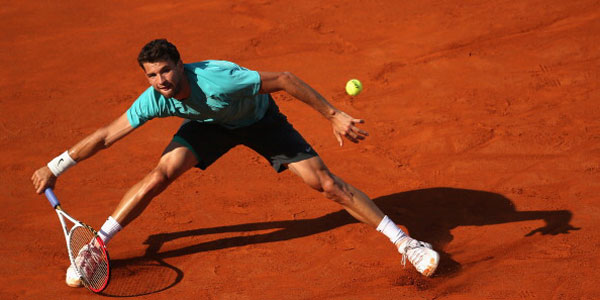 Grigor Dimitrov did not demonstrate good form and after numerous errors allowed No 9 Richard Gasquet of France to win the second round match of the ATP Masters in Rome 6-4 6-4. The commentators of Sky Sport even joked if this is the same tennis player who defeated No 1 Djokovic last week. This is 4th loss for Grigor Dimitrov of 4 matches against Richard Gasquet. Until the end of the tournament several players could gain enough points to position themselves before the current 26th of Grigor.

Next week Grigor Dimitrov will play in ATP 250 tournament in Dusseldorf in Germany. Per the current player list Dimitrov would be 5th seed after Janko Tipsarevic (Serbia, No 11), Nicolas Almagro (Spain`, No 12), Tommy Haas (Germany, No 14), Philipp Kohlschreiber (Germany, No 22).

#4: Grigor. I am sure you will be a top player one day. The sooner, the better. As a Frenchman, I am so happy you come soon in France and hope you get a good draw at the French Open. I can't attend, but will be rooting for you all the time. I saw you withdraw from Düsseldorf. I hope everythind is OK.

#3: Grisho Happy Birthday!
I agree with privious comments. Only you know the reason but you should concentrate yourself and get back on track, because you played bad with Gasquet. And not the loss is the thing that concern me, but your attitude during the game. You seemed you didn't want to play, why? You are better than the most of the players above you in the ranking, but you have to show that on the court. You are still young but if you look in the history, every top player has won some kind of atp title until the age of 19-20. So you should think about this, because we have seen a lot of talanted players ruined their careers because of different bad decisions. Unfortunately there aren't many talents in sport like you in Bulgaria, so all the nation count on you and we hope you will give us joy and occasions to be prouds with our country, because it left just the sport and rare people like you to be proud with. We all believe in you. Take care, focus on the court and keep the other things behind(you know what I'm talking about)

#0: Shame about Rome, but good luck in Dusseldorf, and (especially) in Paris the week after! Hopefully you'll play yourself into form, and go deep (for the first time) in a Grand Slam!