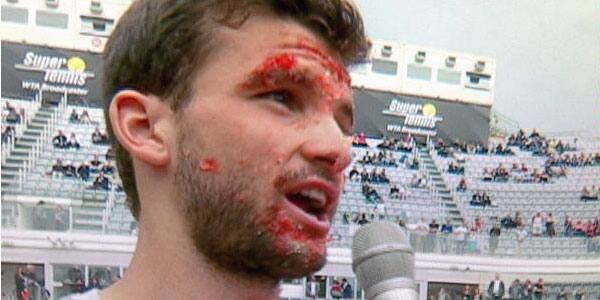 Grigor Dimitrov made his 23rd birthday very happy by reaching his first ATP Masters semifinal. The youngest player in Top 20 advanced to the semifinals after taking the first set 6-2 against the oldest Top 20 player Tommy Haas who had to retire with shoulder injury.

Roger Rasheed "caked" Grigor after the match as present for his birthday and Grigor had to answer the interview questions with face as seen in the photo.


With the 360 ranking points Grigor Dimitrov will be at No 12 on Monday when the new ranking is announced.

The winner of the match of Rafael Nadal and Andy Murray will be Grigor's opponent in the Saturday's semifinal.

#0: Happy birthday Dimi. Hope you enjoy your day. Congrats on the win and your 1st semi in the Masters 1000. Enjoy the celebration!!!!