Dimitrov Slays Another Seed to Enter the Semifinals in Brisbane 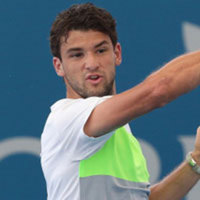 Grigor Dimitrov continues his victorious series in Brisbane, Australia. In the quarterfinals on Friday the young Bulgarian talent knocked off another seed Jurgen Meltzer of Austria in straight sets 6-3 6-2. 10-years-younger Dimitrov started the match very well winning an early break point to 2-0. In the following service games Dimitrov had to save break points on his turn and did it and eventually won the set 6-3. The dominance of Dimitrov in the second set was obvious. Meltzer succeeded to resist until 2-2 ,then Grigor took all the games to close the set and the match. 17 aces and only 1 double fault is the score of the young Bulgarian.

Grigor now has 90 ranking points which position him very close to Top 40.

On Saturday Grigor will play non-seeded Marcos Baghdatis of Cyprus, No 36. This will be 4th semifinal match of Grigor on ATP Tour level. The Cypriot defeated Seed 3 Gilles Simon of France earlier today. Dimitrov and Baghdatis played 2 times before: Dimitrov beat Baghdatis in 3 sets back in 2011 in Munich and Baghdatis cored victory in Wimbledon last year when Dimitrov retired.

Kei Nishikori of Japan advanced to the semis after defeating Alexadr Dolgopolov, Ukraine. His opponent is still to be decided in a match between Andy Murray, Great Britain, and Denis Istomin, Uzbekistan.