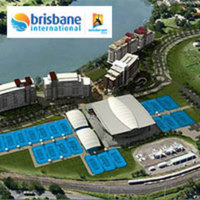 Grigor Dimitrov starts the new tennis season at ATP 250 tournament in Brisbane, Australia with first round match against Brian Baker. The 27-years-old American is ranked No 61. After 2 years break because of injuries Baker started with series of Futures tournaments in the USA. After winning several Futures and Challengers Baker made his return to the top tennis at ATP 250 in Nice where he lost to Almagro in the final after starting from the qualifications. Baker reached the 2nd round of the 3 Grand Slam tournaments - Roland Garros, Wimbledon and US Open.

If Dimitrov beats Baker in the second round we would watch a match between Dimitrov and Milos Raonic of Canada, No 13, Seed 2, who starts directly from the 2nd round. The other seeded players in Grigor's half of the single draw are Gilles Simon (France), No 16, Florian Mayer (Germany), No 28 and Jurgen Meltzer (Austria), No 29. Top seed is No 3 Andy Murray (Great Britain) with Alexandr Dolgopolov (Ukraine), No 18, Kei Nishikiori (Japan), No 19 and Martin Klizan (Slovakia), No 30 being the seeded players of the upper part of the draw.

Dimitrov-Baker match is expected to be played on 31 December 2012 (in the early hours CET).

Grigor entered also the doubles tournament with partner Kei NIshikori and in the first round the Bulgarian-Japanese pair will play Seed 4 Mihail Elgin (Russia) and Denis Istomin (Uzbekistan). The match is on Sunday , 30 December 2012 on Court 1 not before 2 pm local time (5 am CET).