Dimitrov Starts Against Qualifier at Moselle Open in Metz 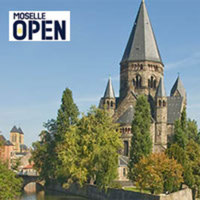 Rank No 149 Igor Sijsling of the Netherlands will be the opponent of Grigor Dimitrov at the start of ATP 250 tournament in the French city of Metz. The 24-years-old Sijsling came from the qualification tournament after 2 wins. The match Dimitrov-Sijsling is second in a row at Centre Court as the start is at noon CET.

In the second round Grigor Dimitrov would meet Phillip Kohlschreiber of Germany, No 48, Seed 7. In the second half of the draw are also No 15 and Seed 2 Richard Gasquet of France, No 29 and Seed 4 Ivan Ljubicic of Croatia and No 48 and Seed 8 Gilles Muller of Luxembourg. The upper part of the draw is lead by No 10 Jo-Wilfried Tsonga of France. Th other seeded players are: Alexandr Dolgopolov of Ukraine, Michael Llodra of France, Xavier Malisse of Belgium.

Grigor Dimtirov has to defend 80 ranking points from winning the title in Bangkok Challenger last year. And it is at least reaching the semi-finals that would cover these 80 points. Grigor Dimitrov already lost 5 positions in the ranking and moved down to No 63 this week.