Dimitrov Was Fined in Helsinki for Pushing the Umpire 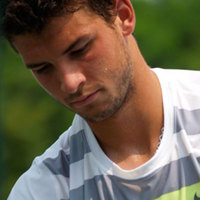 As a result of attacking an umpire at the Challenger in Helsinki last FridayGrigor Dimitrov has been charged €2000 and may expect other punishments. The Bulgarianis reported to have attacked umpire Daniel Infanger away from the court after the semifinal loss to Richard Berankis. The director of the competition said that the Association of Tennis Professional could yet impose a more severe punishment on the Bulgarian player after examining the case.

Antti Aine, the President of the Finnish umpire's association, said extremely critically:"The immunity of the umpire is a sacred thing in sports. You can disagree with calls but this was way out of line”.
Although Grigor almost secured his stright main draw entry of Australian Open by reaching No 106 of the ATP ranking a suspension could possibly endanger Dimitrov’s place.

#4: After the way Dimitrov finished 2010 season I really hope he can play at the Australian Open in 2011.
Best wishes Grgigor, from your number 1 fan from the UK!

#3: I admire Grigor for admitting his mistake, and not blaming anyone else. Regardless of the circumstances (alleged bias, etc), Grigar behaved inappropriately. People make mistakes. The important thing is to understand and learn, not deny.
Good luck in 2011 !

#2: CAN U REMOVE THIS ARTICLE ALREADY OR PLEASE PUT ANOTHER ONE. WHAT IS HAPPENNING WITH AUZI OPEN? WE FORGOT ABOUT THIS INCIDENT ALREADY AND GRISHO HAD APPOLOGIZED AND EVERYONE HAD MOVED ON. I WANT TO HERE WHAT IS NEXT FOR GREG AND WE THE BULGARIANS IN CHICAGO LOVE YOU!

#0: Hi, I just read the penalty decision for Grigor Dimitrov. Grigor was not on the court and he did not really attack the umpire. Another thing is that noone mentions what the disagreement was which could have been really offensive. The umpire immunity should be protected, I agree, but by law the discrimination is punishable too. Berankins is sort of finish own kind and Grigor is coming from a low respected nationality. This is not the military. The umpires have to be also held responsible for biased behavior. I have never heard that they were, neither has Grigor. Who can he complain to? Noone, right. Its done! Suck it up! What if this was happening over and over again ... You can't take it any more ... This is a second time I see bulgarian player being dishonored in such a terrible way. I am originally Bulgarian living in a community with little diversity tolerance and if you are not tough mentally, you may lose your mind of the discriminative actions, words and suppression the locals do to you. This can be a mental condition. I believe Finish are believed to be of very little tolerance of other nationals, especially Bulgaria. Federer and Nadal are coming from well respected countries, which Grigor does not. Please do not allow bringing one teenager down for reasons like these. Make him promise and teach him how to control his anger, but do not stop his career!