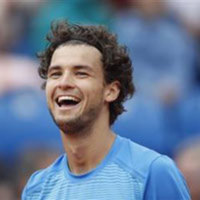 Grigor Dimitrov advanced to the second round of the ATP Challenger in Prague, Czech Republic, after defeating Stepahne Robert of France 6-1 3-6 6-3. The match started with a long first game where Dimitrov had to save 4 break-points until taking his service game. After that Grigor won convincingly the set 6-1. In the second set Robert took the lead after breaking the service of Dimitrov. When the score was 5-2 Grigor had to save 4 set-balls and new 3 set-balls in the next game but eventually Robert took the set 6-3. In the 3rd set Dimtirov broke the game of Robert and quickly reached to 5-1 lead. A double fault of Dimitrov allowed Robert to narrow the advance to 5-2. Grigor took his next service game to close the set 6-3 and this way to win the match. It's a second win for Dimtrov over Robert after the victory in Cherbourg, France earlier this year.

For today's win Dimitrov added 8 ranking points to his balance.

In the second round on Friday Dimitrov will play the 21-years-old German Dennis Bloemke who came from the qualifications. The No 338 German player defeated Uladzimir Ignatik of Byelorus earlier today.