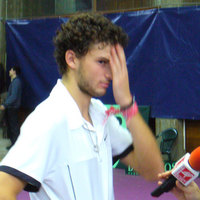 Thecaptainof the Bulgarian national team for Davis Cup Ognyan Iliev anounced that Grigor Dimitrov had injured his arm during the trainings for thematchesagainst Monaco last weekend. Grigor played and won his matches despite the pains in his arm. Grigor will undergo treatment during the next 3-4 weeks and only then will go back to the courts andparticipatein tournaments.