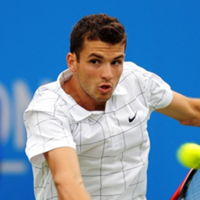 Grigor Dimitrov stopped his unlucky series of 4 losses after defeating Daniel Evans in a very tight match of the first round of the ATP 250 tournament in Eastbourne, Great Britain, with a score of 2-6 7-6(5) 6-4. No 300 Evans took the first set 6-2 and reached a lead in the second with a break. Grigor succeeded to recover and brought the set to tie-break which he took eventually. Dimitrov took the 3rd set an won the match. Dimitrov will add 20 ATP ranking points to his balance.

In the second round Grigor will play the winner of the first round match between Kevin Anderson of Sout Africa, Seed 7 and No 38, and the qualifier Alexander Slabinsky of Great Britain, No 558.

On Tuesday Grigor Dimitrov and Andreas Seppi of Italy will start in the doubles against the Argentinian-Brazilian pair Berlocq/Ferreiro.