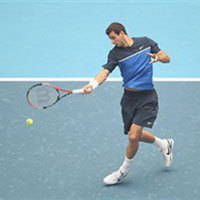 Grigor Dimitrov started with an easy win at If Stockholm Open, €600K ATP tournament. In the first round Dimitrov defeated Ryan Sweeting of USA, No 66, with a score of 6-3 6-1. Grigor Dimitrov dominated throughout the match and did not let any break-points, in his turn he won 4 break points.

Grigor won €9'265 of the prize money and 20 ranking points. Dimitrov has to defend 75 ranking points from reaching the final in Orleans, France, last year.

On Thursday Dimitrov will play the Argentinian Juan Ignacio Chela in the second round of the tournament. The 32-years-old Chela is No 28 as his highest rank was No 15 back in 2004. 2011 is successful for Chela - he reached one final and 3 semifinals. At Roland Garros he played at the quarterfinals.

The match is on the Central Court at 12:00 noon CET and could be followed live.

#2: Nice win! Soo much fun to watch. If you play like this you can win the whole thing. Why not? Raonic got one. Go Go Man!