Failure at the Roland Garros Debut of Grigor Dimitrov 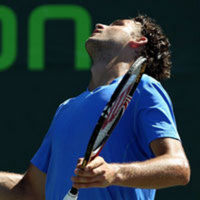 Grigor Dimitrov played a weak match in the first round of Roland Garros in Paris, France. Jeremy Chardy of France easily defeated the Bulgarian in straight sets 6-2 6-4 6-4. Dimitrov was far from the best tennis he has shown so far while the play of Chardy was very steady.

Grigor Dimitrov will play in the first round of the mixed doubles in partnership with Aravane Rezai of France.

During the week of 6 June Dimitrov will start the grass season at Queen's Club in the company of Nadal, Djokovic, Murray, Roddick, del Potro, Cilic, Tsonga, Wawrinka, Karlovic and Verdasco.

#0: All right, man. Learn the lesson and move on. You gotta fight, Bro! Good luck on grass. Everybody likes you and expect better tennis. You CAN do it - just beleive it and fight for every point.
BTW, loose the hair gel dude and do your Nake thing like Roger, Rafa, and Del Potro. The press likes it and the fans too.