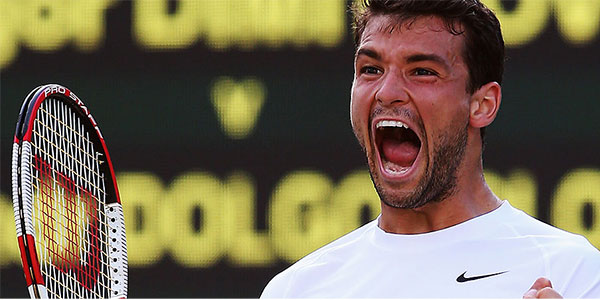 In the third round of Wimbledon Grigor Dimitrov fought from behind to ultimately beat the Ukrainian Alexandr Dolgopolov in 5 sets in almost 3 hours 6-7(3) 6-4 2-6 6-4 6-1. He is the first Bulgarian who reaches that far in this most prestigious tennis tournament, the third Grand Slam tournament of the year.

On Monday Dimitrov will try to enter Grand Slam tournament quarter-finals for the second time in his career after the participation at Australian Open in the beginning of this year. In a first-time meeting Grigor Dimitrov will play Leonardo Mayer. The 27-years-old Argentinian is currently at No 64 in the ranking with best ever position of No 51 reached in 2010.

Grigor Dimitrov increases his the chances to enter in Top 10 after the end of Wimbledon. Kei Nishikori and John Isner are the other two players who are candidates for Top 10.

#2: You have made a big headway in Wimbledon Grigor,hope you continue to play your best and win.Good Luck

#0: Congratulations on your win today Grigor and on being the first Bulgarian ever to reach the fourth round of a grand slam tournament. Best of luck for Monday.