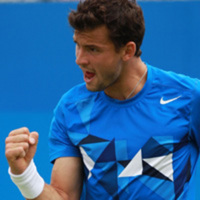 In a quarterfinal match of the ATP tournament on grass in Queen's, London, Grigor Dimitrov defeated world No 30 Kevin Anderson of South Africa 4-6 6-4 6-3. This way Grigor became the first Bulgarian who reach semifinal of ATP level tournament. With the 90 points gained until this phase Dimitrov will move to around 63rd rank.

"I was basically kind of stuck after the first set, but thank God it rained so I had time to go back in the locker and had time to review the first set and see what I did good and see what I did bad," said Dimitrov after the match. "After I think I was just more focused and more steady than him. It was ups and downs, but what's important is the end result. I got a couple of tears. It was a good moment. I always wanted to share this with the people that I love."

The semi-final opponent of Dimitrov is still to be decided in match between David Nalbandian of Argentina and Xavier Malisse of Belgium.

#1: Congratulations for reaching the semi-finals!

And sorry for the loss against Nalbandian. :-(

Everyone is having his own rituals but I am amazed how Nadal is focusing before every serve with bouncing the ball. It is a mind clearing ritual and helps focusing especially before the first serve.