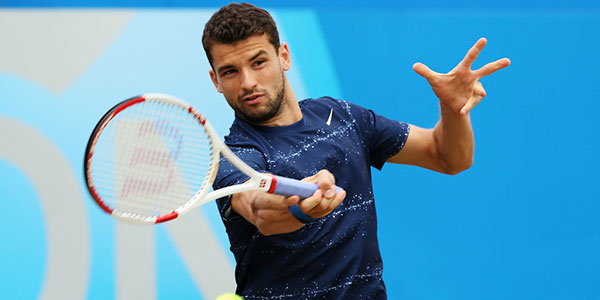 Grigor Dimitrov has beaten Feliciano Lopez of Spain 6-7(8) 7-6(1) 7-6(6) to win his first grass court title in Queen's Club, London. The young Bulgarian saved a match point when serving to stay in the second set and in recovered from break down in the third set to triumph with fourth career title. Dimitrov won titles on 4 different courts - indoor in Stockholm, hard in Acapulco, clay in Bucharest and now grass in London.

"It was an amazing match," Dimitrov said. "It has been amazing coming here every year and playing this tournament. It means a lot to me."

"I'm really happy to get through that match in such a way. Thank you all for supporting me, it has been a great week. Everyone makes the tournament so easy for the players."

He also showed his gratitude to his girlfriend, Maria Sharapova, who was supporting him from the stands. "Maria, thank you for coming to watch."

The first participation of Dimitrov at The Queen’s Club was five years ago when he was ranked World No. 361 with wild card from then-Tournament Director Chris Kermode. In recognition Dimitrov made his way over to Chris Kermode, ATP Executive Chairman and president, and handed him his racket from the victorious match.

Grigor Dimitrov won 250 ranking points but only 160 points will be added to his balance and he will keep his 13th position on Monday.

Next week Grigor Dimitrov will be at the exhibition tournament BNP Paribas Classic in London in the company of Andy Murray, Kei Nishikori, Tomas Berdych.

#0: Congratulations on your win at Queen's today Grigor - a really splendid game. All the best for Wimbledon.