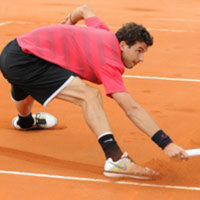 Dimitrov will add 45 ranking points to his balance for reaching the second round.

The opponent of Grigor Dimitrov in the second round on Thursday will be Richard Gasquet of France, Seed 17 and world No 20.

You are far away my favourite tennis player! One day we'll see you n1! C'mon Grigor! You're the best!