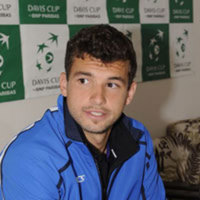 Grigor Dimitrov is the lead player of the Bulgarian team in the Davis Cup tournament that starts today at Carlsberg National Tennis Center, Sofia, Bulgaria. It is Group III Zone Europe of Davis Cup. 2 teams will be promoted to Group II Zone Europe/Africa.

Thirteen nations will participate in format that starts with round-robin in 4 pools. Bulgarian is in pool B with Albania and Georgia.

Pool A includes the teams of Andorra, Lithuania and San Marino. The nations in Pool C are Montenegro, Armenia and Macedonia and there are 4 teams in Pool D: Greece, Norway, Malta and Iceland.

Grigor Dimitrov is with Dimitar Kuzmanov, Todor Enev and Petar Trendafilov in the Bulgarian national team.

Ognyan Iliev, the captain of the Bulgarian team said that there is no place for any plans and calculations and the promotion to Group II is mandatory.