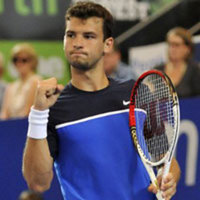 Grigor Dimitrov demonstrated his talent at 100% in the men's single match of the Bulgaria - USA tie at Hopman Cup in Perth, Australia. The young Bulgarian scored his first win over Top 10 player by convincingly defeating No 8 Mardy Fish 6-2 6-1 within 1 hour. Earlier today Tsvetana Pironkova lost to Bethanie Mattek-Sands 4-6, 4-6. Before the doubles match which will start in a while the result of the tie is 1-1. It is Czech Republic who guaranteed the top position of the Group A and will play at the final on Sunday after winning over Denmark with both Kvitova and Berdych defeating Wozniacki and Nielsen respectively.

#3: You was amazing! Keep it up also in the big tournaments like Australian Open and your ranking will be as you really deserved!TOP 10!!! :)

#2: Congratulations! That's what happens when you return every ball back.

The frustration in your opponent is the measure for how well you played this game!

#1: Great play and great win!!! Bravo Grisha!!! Carry on that way soldier:-)!!! I don't know what the fish told you and it obviously wasn't nice... One thing's for sure: he's a bad loser and bad sport aswell. How sad for him and how great for you, because you said what you had to say on the court with your game and incredible performance. Once again: CONGRATULATIONS!!!

#0: Congratulations!!Well done!!!!
Keep it up ,enjoy the moment and just do it!! Good luck for the nexts tournaments.
Даваи гриша!!!ти можеш!!!