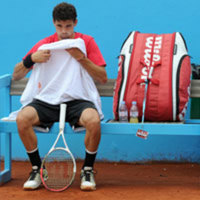 In the second round of Open de Nice Côte d'Azur seed 2 and world No 12 Gilles Simon of France beat Grigor Dimitrov 6-3 6-3. The overall Simon - Dimitrov balance is now 3-0. With the points won from the tournament Dimitrov will move ahead in the ranking to around No 87.


Next week Grigor Dimitrov starts in the first round of the main draw of the second Grand Slam tournament of the year - Roland Garros in Paris.