Grigor Dimitrov Advanced to Round 2 of the Qualifications in Nice 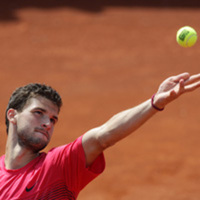 Grigor Dimitrov defeated the wild card entry Alexandre Sidorekno of France, No 389, in the first round of the qualifications of the ATP 250 tournament in Nice, France. In the first set Dimitrov succeeded to break when the score was 5-5 and then won the set. In the second set Sidorenko won an early break-point and reached to 2-0 lead. Dimitrov broke in his order for 2-2. And it was again when it was 5-5 Grigor broke the service game of the Frenchman and then won the second set and the match 7-5 7-5.

Grigor gains no ranking points for advancing to the next round. The Brazilian Joao Souza is the opponent who Dimitrov in the second round of the qualifications. The match is on Central Court and is expected to start at about 5:30 pm CET on Saturday. Souza is No 118, he is specialist on clay. The Brazilian has 3 Challenger titles and 5 ITF Futures titles in his career so far.