Grigor Dimitrov Advanced to the Quarterfinals in France 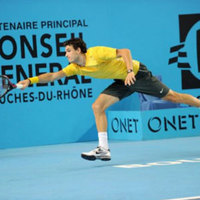 Seed 1 Grigor Dimitrov advanced to the quarterfinals of the ATP Challenger in Cherbourg, France, after defeating Ivo Minar of Czech Republic in the second round with a score of 7-6(5) 6-2.

In the first set both players succeeded to win their service game and that lead to tie-break. When the games were 5-5 Dimitrov broke the game of Minar and won the next game and the set when it was his turn to serve.

In the second set Dimitrov started with a break, then once again won when Minar was serving to 5-2 and easily closed the set 6-2 and won the match.

This stage of the tournament brought 17 ATP ranking points to the Bulgarian.

In the quarterfinal match on Friday Dimitrov will play the Swiss player Stephane Bohli, Seed 8 of the main draw, 148th position in the ATP ranking.

On Thursday Grigor Dimitrov and his partner Konstantin Kravchuk of Russia will play in the quarterfinals of the doubles tournament against Chris Eaton (Great Britain) / Frank Moser (Germany). In the first round the Bulgarian- Russian pair defeated Pavol Cervenak (Slovakia) / Ivo Minar (Czech Republic) with a score of 7-6(5) 6-4.

#1: No, he will play at Challenger in Sarajevo, Bosna and Herzegovina