Grigor Dimitrov Advanced to the Quarterfinals in Queen`s 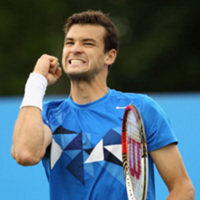 Grigor Dimitrov continues with his victorious series at ATP tournament in Queen's, London. In the 3rd round of the grass tournament Dimitrov defeated Nicolas Mahut of France in two sets 7-6(3) 6-4. In the beginning of the match both players were winning their service games to 3-3. In the 7th game Mahut won a break point to 4-3. With 5-4 lead for Mahut Dimitrov missed 6 break-points and succeeded when he had the 7th chance and brought the score to 5-5. The set was decided in a tie-break which Dimitrov took with 7-3. In the second set Dimitrov won a break-point and lead in the score 3-2. When leading 5-4 Dimitrov scored 2 subsequent aces and won the first match ball.

It is 5th time for Grigor to advance to the quarterfinals on ATP level. Dimitrov gained 15K EUR for reaching this stage of the tournament and added 45 ranking points.

On Friday Dimitrov will play Kevin Anderson of South Africa, Seed 9 and rank 30. Anderson leads in the matches played with Dimitrov so far 2-1.