Grigor Dimitrov Advances to the Second Round in Queen's Club 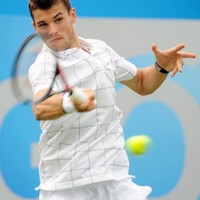 After resuming the match on Tuesday Grigor Dimitrov was able to win the first round match against Alex Bogdanovic 4-6 6-4 6-4. In the second round of theprestigiousATP grass tournament in London Dimitrov will the Spaniard Feliciano Lopez, Seed 8 of the tournament and current ATP rank 31. Lopez had a bye in the first round and will start directly in the second. By reaching the second round Grigor Dimitrov defended the ATP points from last year.