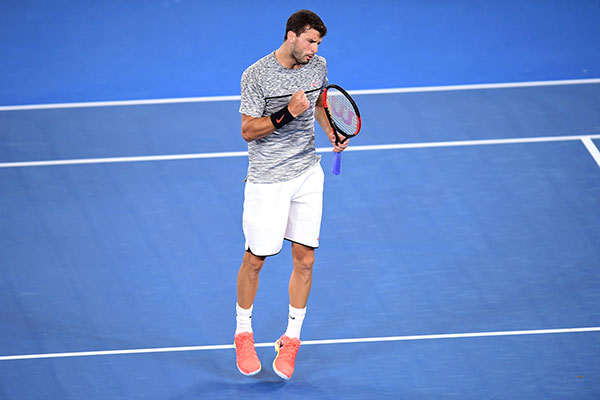 The third round match of Grigor Dimitrov against No 18 Richard Gasquet started just before midnight local time on Saturday delayed mostly because of the previous matches on Rod Laver Arena including the five set win of Nadal over Zverev. Dimitrov needed about 2 hours to beat the Frenchman Richard Gasquet in straight sets 6-3 6-2 6-4. The Bulgarian fired 48 winners including 11 aces and saved six of the seven break-points he faced. This is the 8th consecutive win of Grigor for the new season.

"Lately I've been struggling with my sleeping and going to bed so late, so this is great," Dimitrov joked. "It's my first win on this court so I'm embracing this moment. Thanks to all the fans who stayed here."

Dimitrov advanced to the second week of Australian Open for the third time. In 2015 he lost to Andy Murray in the 4th round. His best appearance in Melbourne was in 2014 when he beat Milos Raonic and Roberto Bautista-Agut in the third and forth round and lost to Rafael Nadal in the quarterfinals.

On Monday Grigor Dimitrov will play the wild card holder Denis Istomin of Uzbekistan. In the only ATP Tour level match the Bulgarian beat Istomin in 2014 at Shanghai Masters.

#1: Well done Grigor. You own Goffin and beaten Roanic and Nadal recently. With same confidence you will reach final. Best of luck

#0: Well done. Now you can reach semis. Keep it up