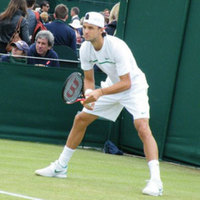 Dimitrov needed 1 hour and 7 minutes to defeat Tommy Haas of Germany in straight sets 6-3 6-2 in the first round of the $620K ATP tournament in Los Angeles, California, USA. The current rank of 33-years-old Tommy Haas is 579 while his best rank was No 2 back in 2002. For his win in the first round Grigor gained 10'800 USD of the prize money and added 20 ATP ranking points to his balance.

In the second round Grigor Dimitrov will play the American Alex Bogomolov Jr. 2011 is the best in the career of the 28-years-old American who was born in Russia. His current rank is 64. Bogomolov reached 3 ATP tournament quarterfinals earlier this year and recorded win over Andy Murray at Miami Masters.

On Wednesday Grigor Dimitrov and Dmitry Tursunov of Russia will play in the first round of the doubles tournament against Seed 4 Jonathan Erlich and Andy Ram of Israel.

#0: what happened with u?i don't see any improvement from u.u lost the lower-ranking player,not one time