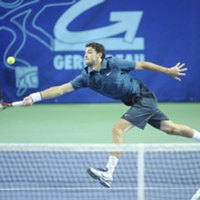 Another Top 100 tennis player was defeated by Grigor Dimitrov. The Bulgarian won over No 32 Michael Llodra of France in the semifinal of Open d'Orléans in three sets 7-6(4) 3-6 7-5 within more than 2 hours. For the win in the semifinal Grigor gained 75 ranking points which would position him at around No 112 in the ATP ranking. Grigor reaches for the first time in his career the final of a tournament of this rank - 106'500 EUR prize money. On Sunday he will play Nicolas Mahut, ATP rank 160, best ranking being 40. Mahut became famous with the match against Isner at this year's Wimbledon with duration of 11 hours and 70-68 games in the 5th set.

GRIGOR YOU ARE THE MAN!!! This is an incredible win