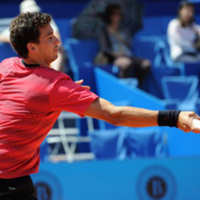 Grigor Dimitrov succeeded to the get place in the main draw of the ATP 250 tournament in Nice, France. Dimitrov defeated the Frenchman Eric Prodon 4-6 6-1 6-4. For this win Grigor gained 12 ranking points and 4080 EUR of the prize money.

In the first round of the main draw Grigor will play Dudi Sela of Israel. The 27-years-old Sela is No 71, back in 2009 he reached his best rank of No 29. Earlier this year Sela reached the semifinals of ATP tournament in Memphis. Dudi Sela and Grigor Dimitrov have played only once before and it was Sela who won during the Challenger in Israel in 2010.

Top seed of the main draw is the American John Isner, No 10. The seeded player on the upper part of the draw are No 14 Gael Monfils of France, No 32 Bernard Tomic of Australia and No 43 Denis Istomin of Uzbekistan.

Dimitrov is on the lower part of the draw where in the second round he could meet Seed 2 and world No 12 Gilles Simon of France. No 13 Spaniard Nicolas Almagro, No 40 Dutch Robin Haase and No 45 Italian Fabio Fognini are the other seed players.