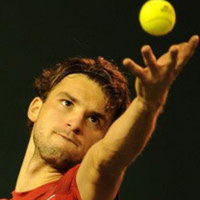 Grigor Dimitrov is the first Bulgarian tennis player to enter Top 50. In this week's ranking table Dimitrov is No 48. Only two weeks ago Grigor was No 62 and the good performance at the tournaments in Basel and Paris gained him points to reach No 55 and now No 48. The ATP Challenger tournaments are ongoing and some of the players might go ahead of Dimitrov, yet he has the chances to finish the year 2012 as Top 50 player.