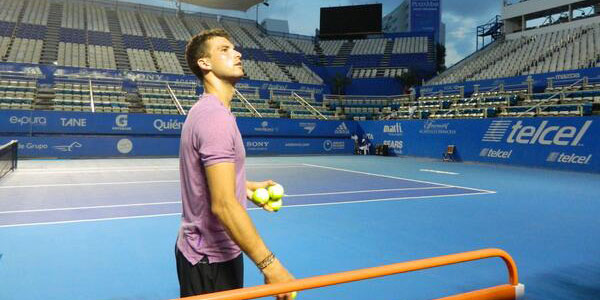 This week Grigor Dimitrov plays at Mexico Open, ATP 500 tournament in Acapulco. The Bulgarian is seed No 4 of the main draw. In the first round Grigor Dimitrov will play Marinko Matosevic. The 28-years-old Australian is currently at No 55. If successful, in the second round Dimitrov would play Marcos Baghdatis of Cyprus or Miguel Angel Reyes-Varela, both with wild cards in the main draw. The first seeded player that Grigor would play is the Latvian Ernests Gulbis at the quarterfinals. The other seeded players in the lower part of the draw are Andy Murray and Gilles Simon. In the upper part the seeded players are: David Ferrer, John Isner, Kevin Anderson and Vasek Pospisil.

On Monday Grigor starts in the doubles tournament in partnership with the Austrian Jurgen Melzer. The draw was not lucky for them as in the first round the Bulgarian-Austrian pair will have a tough match against seed 1 pair Lukasz Kubot, Poland, and Robert Lindstedt, Sweden.