Grigor Dimitrov is No 12 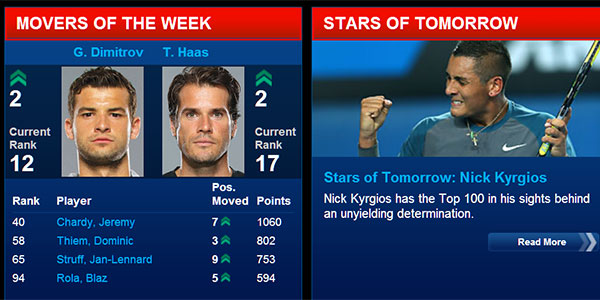 It is now official, in today's Emirates ATP Rankings Grigor Dimitrov is at No 12, his new best ever ranking. With the points for reaching the semifinals of Rome Masters Grigor moved from 14 to 12 and is at 300 ranking points from No 10 Kei Nishikori. The only change of position in Top 10 is the 9th rank of Milos Raonic ahead of Kei Nishikori. Rafael Nadal is No 1 ahead of the champion from Rome Masters Rafael Nadal. The two Swiss players Stanislas Wawrinka and Roger Federer are No 3 and 4. The Spaniard David Ferrer is No 5. Tomas Berdych of the Czech Republic, Juan Martin del Potro of Argentine and Andy Murray of the Great Britain occupy places from 6 to 8.

Grigor Dimitrov advanced with 58 places in the doubles ranking and returns back to Top 100 as No 84.

The new No 12 is back to the courts next week when the second Grand Slam tournament Roland Garros starts in the French Capital Paris.

#2: Good luck at Roland Garros Grigor,play your best and stay focused fingers crossed for you x

#1: Congrats Dimitrov on your new ranking. Your moving on up.