Grigor Dimitrov is No 71 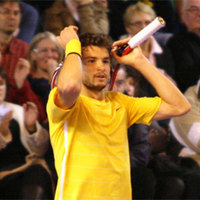 With the points from the title in Cherbourg, France, Grigor Dimitrov continues his climb in the ATP ranking. This week he is at his new best position of 71 which is 7 positions higher. In the doubles ranking Dimitrov moves 232 positions ahead to No 620.

The other Top 1000 Bulgarians in the ranking lose positions except Boris Nicola Bakalov who goes 46 places ahead to No 810. Tihomir Grozdanov is No 2 Bulgarian - 552 followed by Dimitar Kutrovsky - 556, Todor Enev - 781.

There are no changes in Top 29 with Nadal, Federer and Djokovic on the top of the table.