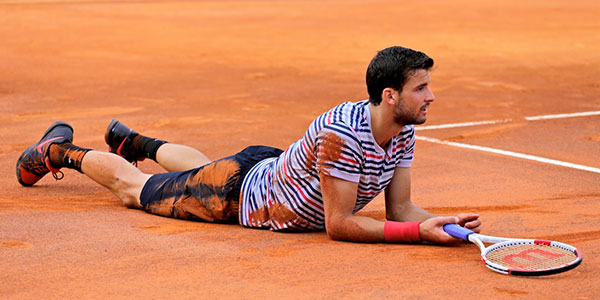 Grigor Dimitrov took revenge for the loss in Madrid to Tomas Berdych. In the third round of Rome Masters the young Bulgarian defeated sixth seed Berdych 6-7(3) 6-2 6-2 in 2 hours and 25 minutes. This was sixth win of the Bulgarian over Top 10 tennis player and the second for this year after beating Andy Murray.

"The most important thing was the win for me today," said Dimitrov. "It was very nice to bounce back from my loss in Madrid to Tomas. Today, everything went my way. It's always a battle when I play Tomas, but coming into the third set it was a totally different story and it made my day. I think I've proven that I can compete at a high level. It's what I've been working for, to win matches like that and play decent tennis. [In my mind] it's not an upset, it's just a good day at the office for me. I think I've learned a little bit since last week when I played him. I competed really hard."

Grigor Dimitrov will play in quarter finals of Masters level tournament for the second time. On his birthday he will play against world No 19 Tommy Haas of Germany. Dimitrov has one win and one loss to the 36-years-old Haas. The match is on the Central Court not before 2pm CET.

Grigor Dimitrov and the Czech Lukas Rosol will play in the quarter finals of the doubles tournament against Marin Cilic and Santiago Gonzalez.

#1: HAPPY BIRTHDAY Grigor I wish I was 23 again.Enjoy your day and your tennis x