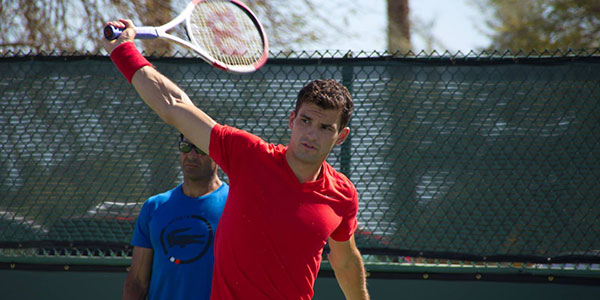 Potential third round opponent of Dimitrov is Ernests Gulbis whom he played twice last month: Dimitrov lost in Rotterdam and won in Acapulco in his way to the title. The other seeded players in the 3rd quarter of the draw together with Dimitrov are No 4 Tomas Berdych, No 8 Richard Gasquet, No 30 Fernando Verdasco, No 22 Philipp Kohlschreiber, No 12 John Isner and No 26 Florian Mayer.

All Rafael Nadal, Andy Murray and Roger Federer are in the upper half of the draw while Djokovic is in the lower half.

The Bulgarian participated in the two previous editions of BNP Paribas Open in Indian Wells. Grigor Dimitrov lost to Novak Djokovic, Serbia, in the third round last year and lost to David Ferrer, Spain, in the second round in 2012.

Grigor Dimitrov is in Indian Wells and had training sessions with Thommy Haas and Roger Federer.