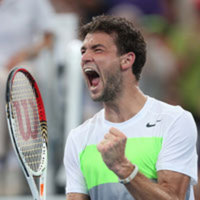 The Bulgarian started the match in best way reaching a lead of 3-0 games. Baghdatis saved another break-point in the next game and made made all efforts to return to the set and had two break-points on 1-3 and 2-4 but Grigor saved them and then closed the set 6-3. In the beginning of the second set Grigor succeeded to break again to 2-1 but Marcos broke in his turn to 2-2. With 5-6 on service game of Grigor, Baghdatis had 2 break-points which were saved but Baghdatis won the 3rd chance and took the set 7-5. The third set was dominated by the serving parties, on 4-4 Grigor had a chance to break but Marcos bravely saved it and eventually the score became 6-6. In the tie-break both payers succeeded to score mini-breaks, Grigor reached set-ball at 6-5 and after an error by Baghdatis, Dimitrov guaranteed his first ATP final.

Grigor Dimitrov earned 41'500 USD of the prize money and added 150 ranking points which may position him at new best ever position of 41.

On Sunday at around 2:30 pm local time (5:30 CET) Grigor Dimitrov will be on court with Andy Murray in a attempt for first ATP title win. This will be second match between them as Murray leads 1-0 after the win in the quarterfinal in Bangkok in 2011.

#3: Great play, congratulations! Play your best tennis and you will win this one! Good luck!